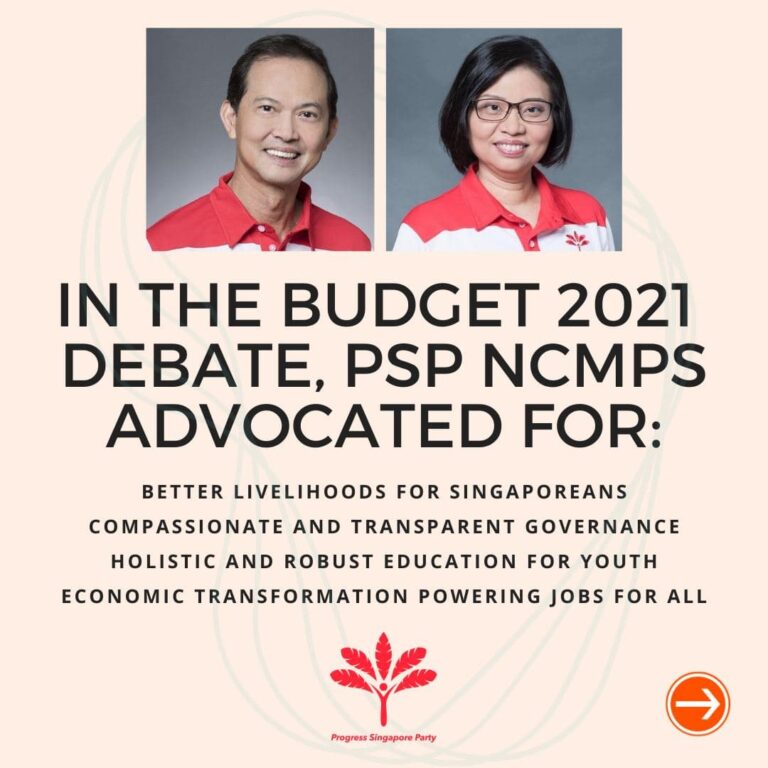 Better Jobs, Livelihoods and Education: A Recap of PSP’s first COS debates for Budget 2021

While the debates have already wrapped up, the issues touched on still remain relevant.

During the COS debates, which follow the announcement of the annual Budget Statement, each MP proposes a nominal “cut” for a respective Ministry’s budget estimates.

Here is a quick recap on the 16 “cuts” that PSP NCMPs spoke about, broken down into four key themes: better livelihoods for Singaporeans; business and the economy; good governance; as well as education and our youth.

Health and housing featured prominently in the NCMP’s speeches about this topic. Both NCMPs filed cuts for the Health Ministry (MOH). Mr. Leong asked for clarification on the cost of healthcare in Singapore, noting that the rising cost of healthcare is a “major worry” for Singaporeans.

Additionally, Mr Leong asked what can we do to help local hawkers here to improve their businesses.

Meanwhile, Ms. Poa asked if the MOH could expand on the areas in which Medisave could be used, especially in outpatient treatment.

Ms. Poa also asked for an update on an ongoing review on Medisave limits, which was first announced in November last year. Among the changes mooted by Ms Poa was the increase of Flexi-Medisave limits which has been increased from $200 to $300 a year.

On housing, Mr. Leong queried the National Development Ministry (MND) on issues relating to supply. Citing data to show that demand for rental units under the Parenthood Provisional Housing (PPS) Scheme has spiked in recent years, Mr. Leong noted that there are “growing signs that the shortage of BTO supply may become a serious problem”.

“One potential source of supply is to delay the demolition of the old HDB flats that have been the targets of the SERS or Selective En-bloc Redevelopment Scheme,” said Mr. Leong.

BUSINESS, JOBS AND THE ECONOMY

In the topic of business and the economy, one area that PSP spoke at length was about foreign manpower.

Ms. Poa, in her speech on the Manpower Ministry’s (MOM) estimates, noted that while PSP objects to over-relying on foreign manpower, the party believes that they “deserve to be protected from being underpaid illegally or facing discriminatory hiring practices”.

To this end, she asked how the MOM will ensure that the foreign workforce complements the local workforce — instead of replacing them outright. She also asked how the ministry ensures the integrity of accepted universities and qualifications for Work Pass applicants.

Ms. Poa also queried the ministry on dormitory standards — an issue thrust into the spotlight amid the Covid-19 outbreak in 2020 — and if the MOM has improved the standards of foreign worker dormitories.

He asked if the MTI was able to provide tax credits to activate excess capital for venture funds, to fund companies so more venture capitalists can invest faster and spread the workload from civil servants.

On good governance, Mr. Leong called on the Ministry for Culture, Community and Youth (MCCY) to redefine the role of the People’s Association, to “ensure that the PA is not skewed towards any political party”. He queried the ministry on why PA’s expenses were higher than other statutory boards like the Inland Revenue Authority of Singapore (IRAS), when the latter has a larger staff strength.

Mr. Leong also put forth “cuts” for both the Home Affairs and Law ministries on the Republic’s legal processes. Raising the recently-concluded court case of domestic helper Ms. Parti Liyani, Mr. Leong asked if more can be done to increase the availability of criminal legal aid to economically-vulnerable applicants.

He also asked for an update on ongoing improvements to the police investigation process, and asked the ministry if it would consider increasing the pool of interpreters, specifically those who speak Bahasa Indonesia, Tagalog, and Bengali, to assist those who would require such services.

Meanwhile, Ms. Poa raised the issue on the spate of National Service deaths, and asked if the Defense Ministry would consider benchmarking compensation to families who have lost loved ones in training, according to reasonable projection of lifetime income.

She also asked if the ministry would consider commemorating fallen comrades on a special day as a reminder of the need for training safety.

On the environment, Ms. Poa asked the Ministry of Sustainability and the Environment if work has been done to address the root cause of flooding in vulnerable areas of Singapore, noting that deforestation removes our natural drainage system, and makes Singapore more susceptible to extreme weather changes.

EDUCATION AND THE YOUTH

Ms. Poa filed a series of “cuts” for the Ministry of Education (MOE), on wide-ranging issues from class size, to preparing students for the future economy.

On class sizes, Ms. Poa said that reducing class sizes — as a result of dwindling enrolment rates — helps create greater diversity and differentiated learning for students. At the same time, a smaller class size helps reduce the emotional and mental load for teachers.

Poa also asked the MOE if the hiring of teachers during this pandemic will resume to normal levels, in light of class sizes not shrinking, and to provide more job opportunities.

The NCMP also asked how the MOE intends to prepare students for the new innovation economy, which she says require a mindset shift towards challenging the norm.

Ms. Poa, who is in the private education sector, spoke about students who have dropped out of school finding it expensive and challenging to return to mainstream education. She queried the ministry if better financial support can be given to these students, and if the MOE will allow these students to join CCAs in mainstream schools to learn and interact with other students.

Lastly, Ms. Poa suggested the MOE tweak its education desired outcome indicators, to one that will better reflect a shift away from grade-centric education.

To this end, she said KPIs could be related to adaptability, teamwork and cross-culture ability.

The seven-day Committee of Supply debates came to a close on 8 March, with Parliament passing the Budget, as well as the estimates for the various ministries. Among the initiatives rolled out, the MOH announced that the flexi-Medisave limit will be increased — an issue that Ms. Poa spoke about in the House.

Join Progress Singapore Party’s fast-growing movement to build a united, compassionate and progressive Singapore. Sign up as a volunteer or member here: https://psp.org.sg/join/. You can also make a donation to PSP if you are a Singapore citizen, to fund initiatives to reach out to Singaporeans and help them in times of need: https://psp.org.sg/donate/.