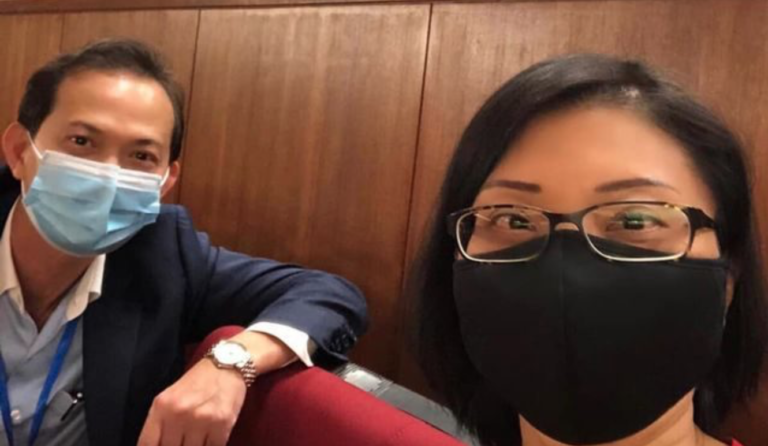 At the heart of the three speeches is the need to show compassion – from migrant workers whose welfare should be improved, to Singaporeans feeling the strain from a bullish property market.

NO EXCEPTIONS FOR TRANSPORTATION OF WORKERS IN GOODS VEHICLES

In her speech during the second reading of the Road Traffic (Amendment) Bill, Hazel Poa urged the Government to mandate that workers be transported only in vehicles with passenger seats.

Current regulations under the Road Traffic Act state that good vehicles are not allowed to be used to ferry passengers, but an exception is made for workers to be carried on a goods vehicle owned or rented by their employer if they meet a set of stipulated rules.

While some progress has been made in improving safety of workers transported in goods vehicles over the past 10 years, Ms Poa noted that there still continues to be injuries — even fatalities.

“It is clear that the current measures for transporting workers as passengers on goods vehicles is not enough and must be improved,” she told the House.

To allay concerns about costs involved in ferrying workers on passenger vehicles, Ms Poa suggested financial assistance for businesses. She noted that the Government had previously doled out assistance to school bus operators — to the tune of around S$22 million — for the retrofit of seatbelts on all seats.

“We can also explore whether there is spare capacity in the form of tour buses now under-utilised that will make this a good time to implement new measures,” Ms Poa added.

She also urged the Government to also proactively review all areas relating to the protection of migrant workers’ rights, including dormitory conditions, recruitment costs, job mobility and strengthening enforcement of breaches by employers.

At the reading of the Covid-19 (Temporary Measures) (Amendment No.3) bill on 11th May, Leong Mun Wai voiced out several concerns about the knock-on effects the measures could have on exacerbating social inequality.

While the bill revolves around providing relief for local construction companies who have been hard-hit by the pandemic, Mr Leong asked for clarification who would foot the bill for the financial relief.

One concern is that property developers will pass the costs on to homebuyers, which Mr Leong said “will be imposing another indirect tax on our people who are also suffering under the Covid pandemic”.

Urging the Government to rein in the bullish sentiment in the property market now, Mr Leong said it is an opportune time to increase the Additional Buyer Stamp Duty to reduce foreigners’ demand, while raising revenue to pay for the financial relief for the contractors.

Relief for construction companies should also come with a commitment to accelerate process redesign, including investing in automation, said Mr Leong. This is a move that could, in the long run, spark interest from Singaporeans to join the building and construction sector, he added.

“If the Government dares to take the bold move to make a bigger increase in the ABSD, there will be even enough additional fiscal revenue to provide for renovated public rental units or subsidised private rental units to Singaporean couples who are waiting for their BTO flats,” Mr Leong said.

While the Significant Infrastructure Government Loan Bill (SINGA Bill) can help to improve the financial efficiency and fiscal accountability of public finances, PSP believes that the bill is “no indication that the Government is short of funds for national development”.

Speaking at the reading of the bill – which will allow the Government to borrow S$90 billion for national infrastructure projects – on 11th May, Mr Leong noted that with large capital inflows and a high Net Investment Return from the country’s coffers, Singapore’s total financial assets are still growing, and are adequate to fund major infrastructural projects.

“Hence, SINGA is just an additional financing scheme and not an absolutely necessary funding source,” he told the House.

Over and above the fiscal accountability afforded by the bill, Mr Leong urged the Government to address the issue of intergenerational inequity.

Said Mr Leong: “Up till now, the Government has always frontloaded all the infrastructural costs to the current generation of Singaporeans and at the same time, parked a disproportionate amount of current fiscal resources into the national reserves.

“In addition, social security costs, namely retirement and healthcare costs, of the Singaporeans are all self-funded by themselves without burdening the future generations.”

Follow Progress Singapore Party on Facebook and Instagram for more Parliament recaps when our NCMPs Hazel Poa and Leong Mun Wai raise topics and questions that affect Singaporeans today.
You can also watch our NCMP’s speeches on YouTube here.

Or make a donation to PSP if you are a Singapore citizen, to fund initiatives to reach out to Singaporeans and help them in times of need: https://psp.org.sg/donate