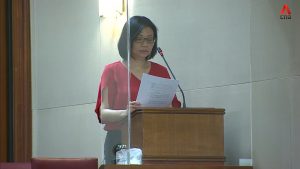 Click on above Picture to play Video. Video credit: CNA

1. I welcome the President’s message that there will be permanent shifts in our approach towards social safety nets.

2. Progress Singapore Party believes that progress should always be accompanied by compassion, and social safety nets play a big role in that. During difficult times, they are of even greater importance.

3. The government has introduced temporary relief measures to help Singaporeans and businesses cope with Covid-19.

4. While government support is essential, we should continue to exercise financial prudence in the utilisation of our reserves.

5. A significant portion of our relief packages goes towards the Job Support Scheme or JSS. The JSS gives companies wage subsidies in an effort to keep jobs. It is a blanket measure that also pays companies that do not require any wage subsidy.

6. Most companies in certain industries, for example technology and financial sector, continue to do well. Several companies have returned the JSS payments, and the government is urging all other companies that do not require this subsidy to do likewise.

7. I urge a review of the unconditional JSS to explore clawing back JSS from companies that are still profitable, and companies that continue to pay million dollar executive salaries, and re-channel these resources to where they are more needed like unemployment support.

8. It is too late to do anything about the JSS payments that have already been made, but we can impose conditions for the additional JSS recently announced.

9. JSS for citizens and PRs should also be differentiated to underline the difference in the government’s duty and obligations to these 2 groups. The first duty of any government is always to its own citizens.

10. Despite our best efforts to stem job losses, according to the economic survey, employment decreased by 131,500 in the 2nd quarter of this year.

11. The Covid Support Grant currently provides for cash payment of up to $800 per month for 3 months for those who have lost their jobs or suffered a significant drop in income.

12. MTI expects the economy to shrink by 5 to 7 per cent this year. Further job losses are thus expected. Under such circumstances, most will take longer than 3 months to find new employment.

13. An OCBC survey this year found that 70% of the respondents did NOT have enough savings to last more than 6 months.

14. In comparison, Government reserves, though never revealed, is widely believed to be sufficient for at least 8 to 10 years of government expenditure. If my figures are wrong, I would be happy to be corrected.

15. There is therefore a lot of room for adjustments in the balance between Government reserves and household reserves.

16. We need to enhance the Covid Support Grant to offer financial assistance for a longer period of time. Otherwise, there will be much anxiety and pain in many families, which will in turn slow down our recovery.

17. Another way we can help families cope with the financial stress caused by Covid-19 is to allow CPF members who have lost their jobs to borrow from their own CPF accounts. These loans can be repaid after finding new employment.

18. The CPF system works well for many Singaporeans. However, for those who are experiencing financial difficulties, it can be very frustrating to see their own savings trapped in an account they are unable to touch to help them ease their current situation.

19. The fact that these savings are being withheld for their future needs is scant comfort in the face of immediate distress. Coupled with the later withdrawal age and steadily increasing minimum sum, it is fuelling dissatisfaction or even mistrust in our CPF system.

20. If we can allow ways for CPF members to rely on these savings in times of need, for their CPF savings to be a source of financial security at all times, not just in the distant future, it will help build trust in the system and peace of mind.

22. Based on current retirement age and life expectancy, there are approximately 20 years of retirement life that we need to plan for.

23. Our CPF system is designed for individuals to be responsible for their own retirement needs. However, certain things are beyond our control, despite our best efforts.

24. If the economy and wages grow rapidly over the years, then the wages earned in the early years would be too low to cope with the cost levels in later years.

25. If inflation is rampant, then retirement funds saved up in the early years would be inadequate.

26. 20 years after retirement is a long time, and retirees are at the mercy of economic forces over which they have no control.

27. So while we do not want to purely rely on our younger generations to support the older generations, to expect every individual to fully fund their own retirement may not be a feasible nor realistic proposition for many.

28. Even in our earlier asset enhancement approach – the idea of owning an appreciating asset that we can then sell to fund our retirement – that involved a transfer of wealth from the younger generation to the older.

29. I would therefore like to suggest that the government explore a hybrid system, where individuals build up their own retirement sums as much as they can, and government steps in after their retirement to help them cope with the effects of inflation.

30. Lastly, with all the current anxieties about losing jobs and incomes, let our people NOT have to worry about losing their homes. I hope the Government will grant further deferment of mortgage payments for households with members who have lost their jobs or suffered a loss in income, for up to Dec 2021.

31. Mr Speaker, the President spoke about the dangers of echo chamber in the online space. But echo chambers exist everywhere, not just online.

32. I remember when I first entered politics and joined an alternative political party. I immediately experienced a marked change in my environment. Many with anti-establishment views sought me out to share their perspectives. People whom I already know previously became more forthcoming in criticising government policies.

33. My environment became decidedly more critical of government all of a sudden. It took great effort to maintain my perspective, to remember that the world has not really changed all that much all of a sudden, but simply that people are telling me what they think I am interested in hearing.

34. If I experienced such being just an opposition candidate, how much more must it have been for someone who wields power.

35. Whether it’s addressing issues of job security, saving jobs, creating new jobs, job discrimination, existential threats, strengthening social safety nets, national identity or retirement adequacy, everyone needs to recognize the bias of one’s echo chamber, that we view everything through filters. And the only way we can mitigate this myopia is to acknowledge that these filters exist.

36. Like any investments, past performance is not a promise of future returns. Dwelling on past successes does not help us chart the path to the future. This pandemic is like a tide rolling out, exposing our vulnerabilities previously under the surface. We need to muster the courage to have an honest evaluation of where we are in the work-in-progress we call the Singapore story. We need to keep an open mind and be prepared to tackle sacred cows.

37. Singaporeans are intelligent, believe in the core principles of justice, equality and the concept of sacrifice for the common good. These are pillars of the Singapore identity that we should continue to uphold. I am confident that we can all find the courage to step out of our echo chambers, listen to all sides without prejudice, and act without pre-set agenda, so we can collectively build the next chapter of the Singapore story.