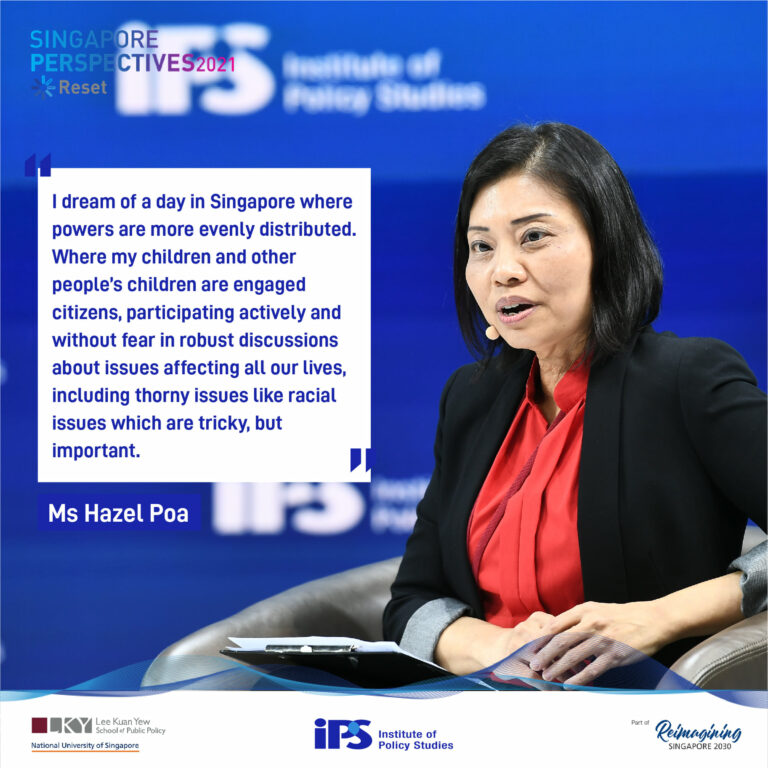 First of all I would like to thank IPS for giving me the opportunity to be here and to participate in a discussion about our future.

In my opening remarks I would like to say something about the topic of an earlier forum – the Soul of Singapore. I was not present in that discussion, but based on the reports I have seen, discussions revolved around culture, community, sports, shared memories etc. It seems to me an important component was not talked about – the role that our politics play in shaping our national soul. This is an area I feel I could perhaps contribute to the discussion.

Let me explain why I think politics play an important role in shaping the soul of Singapore.

Our politics defines us and shapes our soul in a very significant way. It cuts across all sectors and all communities. It is the result of our collective action. It is the face that we present to the world.

When Singapore was deliberating over whether we should allow casinos to operate here, that was one of the defining moments. There was a huge debate over this matter. Those in favour cited economic and financial gains, and the jobs they would bring into Singapore. Those against argued on the basis of ethics and the social costs arising from gambling addiction. In Singapore’s short history, there was a time when we cracked down on gambling and spared no efforts to eradicate it from our landscape. Before the entry of casinos, it had become widely accepted that gambling is harmful to us, and we took pride in our success in decimating it. So the change in official stance was a significant reversal. In the trade-off between material gains and ethics and social cost, the choice that we made defined us.

Another example would be issues like money laundering, which involves a trade-off between financial gains for us on the one hand, and rewarding crime on a global basis on the other. Again, that choice defines us. If we were to adopt positions for selfish gains, then ours will not be a pretty soul.

I hope I have managed to convince you why politics is an important component of the soul of Singapore.

Next I will move on to talk about where I hope our political development is headed.

The first thing I would like to see changed is the culture of fear in politics.

In terms of the fear of the consequences of voting for opposition, I find that level of fear has decreased significantly. What was interesting, was that I began encountering more such questions from new citizens.

But in terms of the fears on joining an alternative political party, fear of running for election on an opposition ticket, that unfortunately is still very much alive. I was frequently asked whether there were any adverse effects on my work after joining opposition. Most were worried about their career prospects. Employees worry about promotions. Businessmen worry about contracts from establishment. Academics worry about tenures or contract renewals.

This shouldn’t have been. We should not have to worry about such things when we want to participate in politics. Responsible people shouldn’t have to worry about making known their stand. Such fears make us less than we can be. And if concerned citizens hesitate to speak up honestly in their own country, what kind of soul are we talking about here?

I have also often been asked – do I have fears about joining an alternative party? Of course I do. I look at precedents and I fear risking bankruptcy with one careless word.

So why do it? In the words of a friend when he explained to me why he would always support candidates in alternative parties. He said that in Singapore, there are many reasons for joining the ruling party, but only one for joining an alternative party – for the love of the country.

When I was 18, I went skiing with a group of university friends. We were all beginners. It was our first time skiing. When we arrived at the ski resort, we discovered there were different kinds of slopes. There were slopes for beginners, there were slopes for intermediate skiers and so on. So we made our way to the slopes for beginners. Things were rather smooth in the beginning. The slopes were nice and gentle and we had fun and laughter. Then we came to a part of the slope that was much steeper than the rest. We stopped and stared at the slope – sure or not? Is this really for beginners? We studied the map again to look for an alternative, but nope, no alternative routes. I decided to heck it and just try my luck. I managed to make it to the bottom of the slope safely. After that, everyone else made their way down, with very minor incidents along the way. I learned a very simple lesson that day. If I can overcome my own fears, that encourages people around me to do the same.

So, yes, I have my own fears, I just cope with them the best way I know how. After deciding to join the opposition cause, I parked some money outside Singapore. Not something to be proud of, but that’s my way of coping with my fears.

That was back in 2011 and things have been changing since then.

Recent developments have been encouraging. The driver for change in political development has always been in the hands of voters, and that is as it should be, in a democracy.

In the recent GE, voters have clearly expressed their desire for a greater diversity of view points. Despite the changes to the NCMP scheme that assured voters of alternative voices in Parliament, the number of elected opposition MPs increased to 10. It signified a higher level of readiness for change than previously expected.

And this has put in motion further developments in our political landscape. We now have an official leader of the opposition, with state resources given. And alternative parties are also receiving more invitations than in the past to events to offer a different perspective on issues.

I dream of a day in Singapore when powers are more evenly distributed, when my children and other people’s children are engaged citizens participating actively and without fear, in robust discussions about issues affecting all our lives, including thorny issues like racial relations which are tricky but important to our lives. After more than 50 years of nation building, do we still need to classify ourselves along racial lines, or are we all just Singaporeans? In the last GE, WP’s Aljunied team won with 3 minority candidates on the slate. Do we still need GRCs? Do we still want self-help groups along racial lines? In what way, precisely, are we not ready for a non-Chinese PM?

We need to address issues head on in order to move forward and make progress, not get stuck in a rut.

And on that note, I conclude my opening remarks and look forward to a fruitful Q&A session. Thank you.